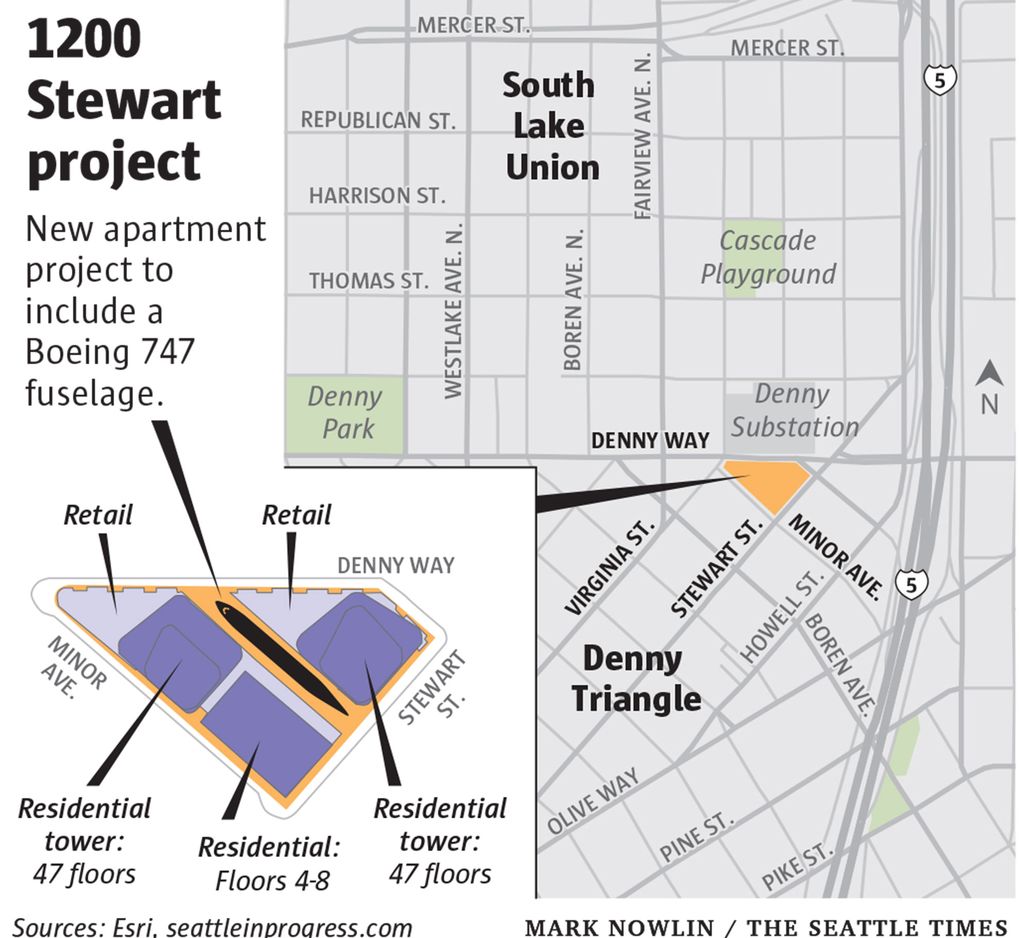 Boeing 747 to park in Seattle high-rise

The iconic jumbo jet that once marked a new era in international travel will arrive in 39 pieces atop two dozen flatbed trailers.

Over the course of several weeks, the crews will reassemble the puzzle piece by piece, suspended in midair between two South Lake Union high-rises.

“Every time someone walks by, they might see a new piece of the plane in place,” said Michael Chaplin, local development manager for Vancouver-based West Bank.

Westbank’s new mixed-use project taking shape at Stewart Street and Denny Way includes the fuselage of a Boeing 747 suspended 14 feet off the ground — a nod to Seattle’s industrial past in the heart of its new tech capital.

“You have so many of these light-filled glass atriums in the middle of commercial or office buildings. That’s nice, but doesn’t have a unique character. So we really went looking for designs that could create something remarkable here,” said Michael Sypkens, an architect whose firm, OSO, first presented the concept for incorporating the 747.

“This is something that hopefully connects the past with the future,” Sypkens said.

More practically speaking, don’t hold your breath for a posh midcentury bar or cafe in the jet. The hull will be office space for the West Bank.

West Bank founder Ian Gillespie occasionally promises public exhibitions. “It’s not something I’m going to open up to the public all the time. I want to make it special,” Gillespie said. “If people want to walk by the plane and take an Instagram photo, it’s there for them.”

The lower levels of the project will contain a Live Nation music venue and Trader Joe’s, plus other shops and businesses. Above this, 1,048 apartments with curved balconies and luxurious amenities will be built in two towers.

Big bets on luxury high-rises started to look risky last year as tech workers sought more space in the suburbs and rents fell in the city. utilities, rents have risen again and the vacancy rate has fallen.

Uncertainty remains about the future of office work for neighborhood giant Amazon, allowing many of its clerks to work remotely indefinitely. Meanwhile, several high-rise towers are underway in South Lake Union, some with rents as high as $2,500 for a studio.

At “WB1200” the Boeing jet will recall another era of luxury.

The 747 debuted in the late 1960s with spacious cabins and a lounge.

With more seats on each jet, airlines can offer cheaper tickets and more people can fly. “It was literally twice the size of anything else in service,” said Ted Huetter, spokesperson for The flight museum in Seattle, where the first 747 was built. Boeing announced in July that it would discontinue production of the 747 next year.

Westbank found his plane at a boneyard in the Southern California desert. The jet has flown with United Airlines from 1990 to 2017 with frequent stops in San Francisco, Tokyo and Hong Kong. Gillespie said the aircraft and installation process is expected to cost between $10 million and $20 million.

When the parts of the hull arrive in Seattle, the crews will reconstruct them around a catwalk-like structure between the two towers. That will be the floor of the office space. Inside, the cockpit will resemble its original form, but other interiors will be replaced.

Outside, the public can walk under and around the hull. Remains of jet engines will be processed during development.

The project will open next fall, but Westbank is considering some sort of preview for aviation fans in the spring, Gillespie said, to “take them up close and personal” with the new landmark.

What does Buildium's Open API mean for property management companies?

Should I Get an Appraisal Before Selling My House Or Will a CMA Work?