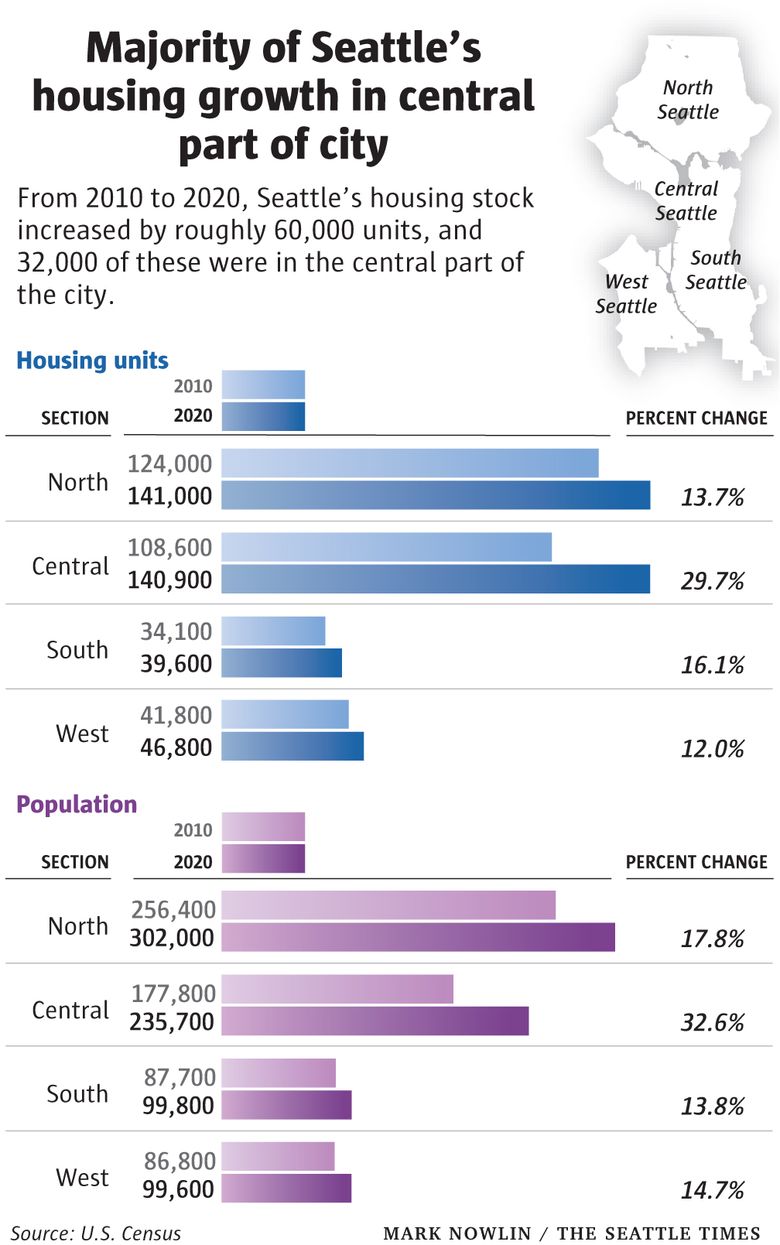 The 2020 census didn’t just count people. It also counted houses. So what does it tell us about housing growth in Seattle, a city often viewed as having a dire housing shortage?

That’s an impressive number. Of the 50 US cities with the largest number of homes in 2010, Seattle ranks third in terms of housing growth rate. Only Austin (26%) and Denver (21%) had a faster gradient.

Some major cities have lost population in the past decade: Detroit, Cleveland, St. Louis, Baltimore and Memphis, Tennessee. All these cities saw their housing stock decrease.

A closer look at the census data shows that Seattle housing growth was far from evenly spread across the city. In fact, one part of the city — Central Seattle — took in more than half of the 60,000-unit increase.

Located between the Lake Washington Ship Canal to the north and I-90 to the south, Central Seattle includes the burgeoning downtown neighborhoods, as well as Capitol Hill and the Central Area.

The number of homes in Central Seattle increased by 32,300, or about 30%. That is more than 10 percentage points faster than the growth in any of the the other three quadrants of the city.

This was more by design than by chance. More of downtown Seattle is earmarked to accommodate high-density growth compared to other parts of the city, which have more neighborhoods primarily dedicated to single-family homes.

The 2020 census data does not distinguish between housing by type, but there is no doubt that most of the housing added in the central part of the city is multi-family.

With the boom in housing, Central Seattle nearly overtook North Seattle, which grew much more slowly over the past decade. Both areas had a total of approximately 141,000 homes in 2020.

The second fastest growth rate in housing in the 2010s was in South Seattle, where 5,500 units were added – a 16% increase. That brings the total number of units to almost 40,000. Much of the new development in South Seattle is along the Link Light Rail line, which runs through the Rainier Valley.

Interestingly, this is the only part of the city where the growth rate of housing has exceeded that of the population. South Seattle has added about 12,000 people over the past decade for a 14% growth. The total population is now about 100,000.

North Seattle has added 17,000 homes in the past decade, bringing the total to 141,000. This corresponds to a growth rate of 14%, which is in third place out of the four city districts. Several of the city’s fastest-growing neighborhoods are located in North Seattle, including Ballard, the University District, and Wallingford.

North Seattle remains Seattle’s most populous quadrant, with a population of 302,000. The population grew by nearly 46,000, or 18%, which is the second fastest after Central Seattle.

West Seattle grew slightly faster in population than South Seattle, with a 15% increase in population. And it has one of the fastest growing neighborhoods in the city: the Junction. Both West and South Seattle had approximately 100,000 residents in 2020.

The 2020 census figures for residential units include both occupied and vacant units. A unit is considered vacant if no one lives on Census Day (1 April 2020), unless the resident is temporarily absent (such as when traveling or in the hospital).

The census shows that the number of vacant units in Seattle has fallen significantly from about 25,000 in 2010 to less than 23,000 in 2020. In 2010, of course, the country was gripped by the Great Recession and a housing crisis that forced many homeowners into foreclosure.

Property transactions due to marriage and divorce cases. Up or down? • kopiandproperty.com