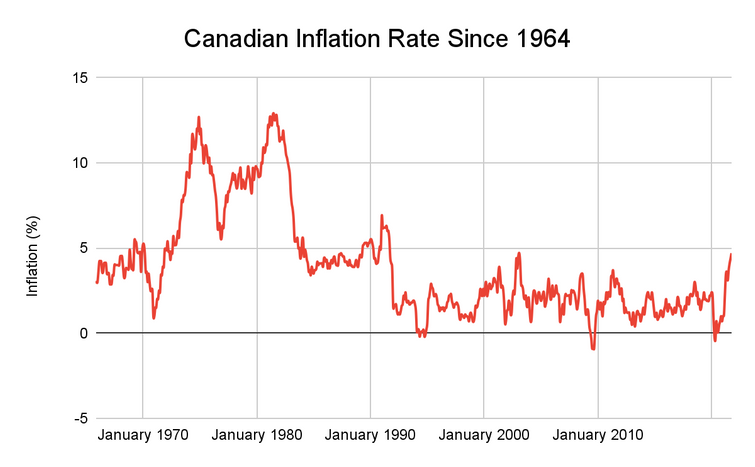 Inflation in the Canadian economy has risen sharply since early 2021. As Canada begins to emerge from the COVID-19 pandemic, there is hope for positive economic growth, but it appears that the pandemic effects could last longer than most expect.

Pressure is now being put on the Bank of Canada to curb rising inflation. The bank maintains its position that high inflation is only a ‘transient’ issue, although some warn that inflation may get worse before it gets much better.

What is the current inflation?

According to new CPI figures released this week, current inflation in Canada hit a new high of 4.7% in October, in line with market expectations. While not the highest level in history, it is the highest inflation Canada has seen since 2003 and more than double the average pre-pandemic level of about 2%.

This is an increase of about 1% at the beginning of the year and 4.1% in August. The US has seen a similar spike in inflation, reaching above 6%. Central banks around the world are also reporting significant inflationary growth.

What is the Consumer Price Index (CPI)?

The Consumer Price Index is a means of measuring price increases in Canada and is the main indicator used to determine inflation.

The CPI tracks the prices of eight major commodities to determine how the economy is inflating or deflating. While different commodities can fluctuate in price, the wide selection of commodities represents an average of Canadians’ household spending.

Each of these goods is weighted in terms of relative importance. The CPI measures costs and applies an index value, the rate at which the index changes is expressed as inflation. Monthly increases are projected to find a hypothetical annual rate, but the rate rarely stays the same for an entire year.

The last time Canadian inflation went wild was in the 1970s and 1980s, when inflation rose by as much as 14%. At the time, inflation was caused by a perfect storm of global economic conditions and failed government economic stimulus. This period of inflation during a recession period was known as stagflation. Eventually inflation was brought under control, partly through higher interest rates, and gradually declined until it hovered around 2% for years.

At the start of the COVID-19 pandemic, inflation dipped low even for a short period. From roughly March to May 2020, the CPI saw very low or no gains as markets faltered in response to new restrictions. The price of gas fell together with the rents and the travel costs fell sharply.

However, as it became clear that difficult times were imminent in the near future, prices for food, gasoline, housing and more began to rise as difficulties in manufacturing and supply chains increased. Since then, inflation has continued to rise sharply.

What inflation means to Canadians

There is some disagreement about the understanding of inflation and how it can affect Canadians. Some people even see high inflation as a good thing and a natural consequence of an unbalanced economy. They also point to positives, such as the fact that inflated money makes paying off past debt even easier as the dollar’s purchasing power declines.

On the other side are the arguments against inflation. These include the fact that as inflation rises, uninvested savings actually fall in value. This is of particular concern to the millions of Canadians approaching retirement age who are now seeing their money dwindle.

There is also the fact that inflation is rising faster than wages. Prices have risen everywhere and the workforce is beginning to demand more compensation for their work, causing labor shortages in some areas. All in all, a less healthy and unstable economy can lead to all kinds of unrest, both economic and social.

What is the inflation forecast?

There is also much disagreement about how rising inflation will play out for Canada. Some predict it as just a temporary adjustment that will disappear, while others fear it is a warning of things to come and a repeat of the inflationary periods of the 1970s.

Recent inflation expectations predict that the CPI will rise above 5% by the end of the year, with a multiple point increase in the forecast in 2022. According to the Conference Board of Canada’s Index of Business Confidence, a majority of companies surveyed feel inflation rates will rise by 2% or more over the next six months. However, the central bank is hoping for an average interest rate of 3.4 percent for 2022, up from an earlier forecast of 2.4%. They aim to reach the inflation target of 2% by 2023.

What Can Canada’s Central Bank Do?

All eyes are now on the Bank of Canada as inflation rises. During the pandemic, the Bank of Canada cut its key rate to record levels to ensure money flow through the economy. They have pledged to wait until at least the second quarter of next year until they raise interest rates, and expect rising inflation to be a temporary problem.

If they’re wrong and inflation spirals too much out of control, they may be forced to announce an early rate hike or a faster rate of hikes to fight inflation. 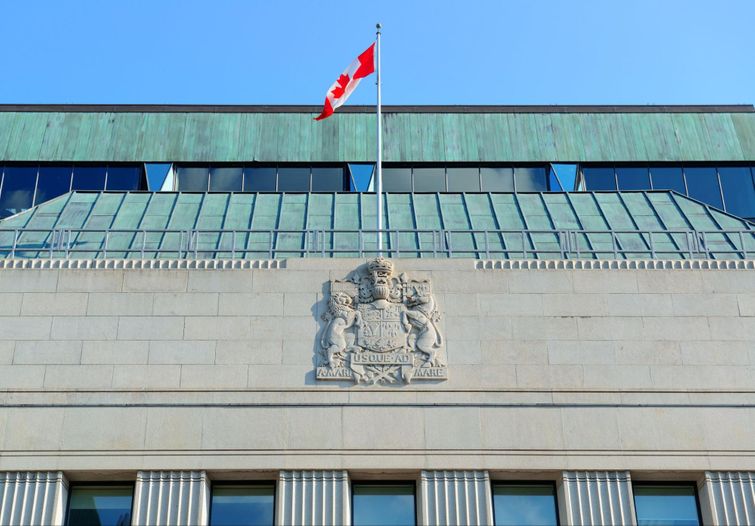 Another means by which the bank has influenced inflation is through its quantitative easing program. Under this program, the bank bought up massive amounts of government bonds, raising their prices and lowering their yields, lowering related rates, such as fixed mortgage rates. At the end of last month, the bank chose to ease this program, and many say it is a sign that interest rates will rise.