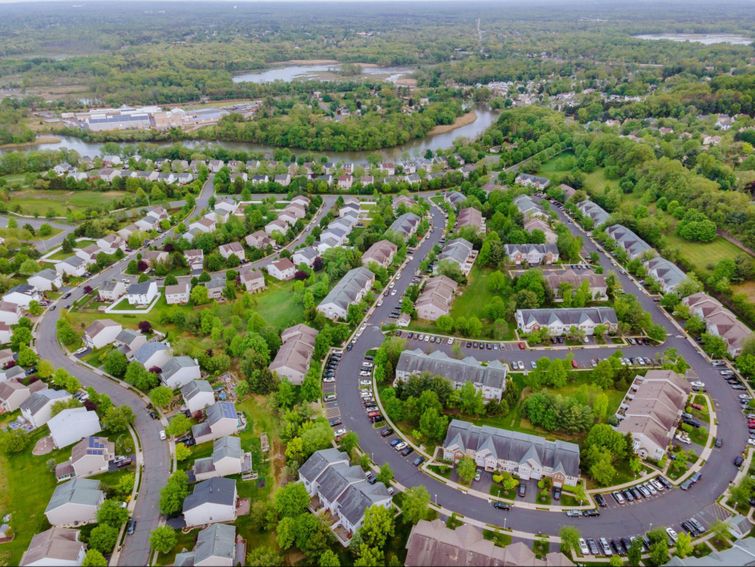 What Canadian mortgage debt can tell us about the economy.

For most Canadians in 2021, debt will be a regular part of life. If you own a home, you probably have a large debt in your mortgage, as well as much smaller debt, such as car payments, student loans, or credit bills. By 2021, Canada’s total consumer debt rose to over $2 trillion.

You might think of debt as your own personal responsibility, but you might be surprised to know that it’s also part of something bigger. You represent part of the larger economy and therefore your debt is actually part of a larger measure known as the debt-to-income ratio.

The debt-to-income ratio is an important indicator, not just for your own personal financial condition. It is also used by analysts to measure the average state of all Canadian financial situations and the state of the Canadian economy as a whole. Particularly as we emerge from the pandemic-induced recession, economists are watching the debt-to-GDP ratio to see how Canadians are coping with changing economic conditions.

What does the debt-to-income ratio mean for individuals?

Your mortgage-to-income ratio is important to you personally because it indicates how much of your income goes toward paying off your mortgage debt. When it comes to getting a mortgage, lenders will consider your gross debt service and total debt service ratios, which are a measure that tells them how much of a mortgage you can afford. Lenders need to know that you have a certain income to not only pay your housing costs, but also to keep paying your mortgage as rates whether your financial situation changes.

What the debt-to-income ratio means for the economy

Individual concerns aside, analysts track the average income-to-debt ratio for all Canadians to know how the country as a whole is doing. The debt-to-income statistic is expressed as a percentage that reflects the value of household debt as compared to household disposable income. According to Canada statistics, the average Canadian income-debt ratio for the second quarter of 2021 was 173%. This means that the average Canadian household owes $1.73 for every dollar earned.

Lately, with house price growth accelerating, the amount of mortgage debt Canadians are taking on per person is now higher than ever.

Another important number to keep in mind is the debt service ratio, which is the amount needed to pay off debt. While the size of Canadian debt has risen, interest rates, especially mortgage rates, have fallen for decades, which is something to keep in mind when talking about debt affordability. The recent rise in house prices was partly due to historically low mortgage rates, making the debt of more expensive houses easier to pay than would otherwise be the case with higher rates. The average debt service ratio for Canadians has remained relatively stable for a long time.

History and trends of the debt-to-income ratio

In recent decades, Canadian household debt has been on the rise, but there have been some small declines from year to year. Most recently, the effects of the COVID pandemic caused Canadian debt to drop significantly, to 159% in the second quarter of 2020. A figure not seen in more than a decade. The highest recorded Canadian debt-to-GDP ratio of over 182% occurred in the third quarter of 2018.

The continued rise in the debt-to-GDP ratio points to rising costs in the Canadian economy, while household income has been unable to keep up. The effects of the pandemic are difficult to fully understand, but essentially, the way Canadians held and paid off debt changed significantly in early 2020 as uncertainty loomed.

Why the ratio is rising

Unlike something like the consumer price index, there’s no reason the Canadian debt-to-GDP ratio should grow continuously. If household income and debt remained the same relative to each other, the ratio would remain constant despite rising costs. The upward trend in the debt-to-GDP ratio then points to a widening gap between Canadian household income and their debt burden.

It could also indicate a changing attitude to debt for Canadians. In general, Canadians seem more comfortable with holding more debt and paying it off over a longer period of time.

Finally, it is worth remembering that both components as a ratio influence the final value. A rise can mean that debts rise, but it can also mean that income falls. 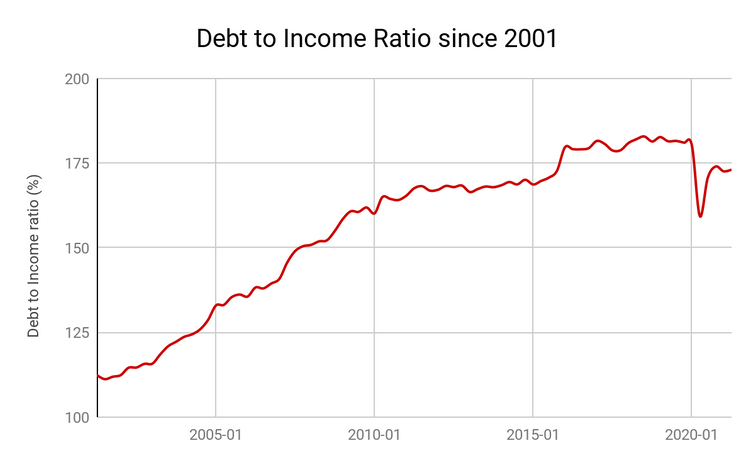 What is the forecast for the debt ratio?

While there was a dip in the debt-to-GDP ratio in early 2020 due to unprecedented circumstances, the ratio is now approaching its pre-pandemic levels. It will likely remain lower as the recession subsides, but the trend of increasing debt is likely to continue into the future.

The reason we should pay attention to a high debt-to-GDP ratio is that it warns of financial vulnerability for Canadians. This is essentially the same reason your lender wants to make sure you have favorable debt ratios before lending to you. Higher debt means that the Canadian economy as a whole is more vulnerable to macroeconomic shocks and much more easily destabilized.

That said, it appears that the most recent challenges of the COVID pandemic have not been the kind of shock that would cause major damage. While there have been temporary blows to things like employment and mortgage arrears, both metrics are now almost back to pre-pandemic levels.

While Canadian debt is high, thanks in part to things like the mortgage stress test, Canadians have shown to some degree that they can weather the storms of economic tension.

A rise in Canadian debt may even signal optimism about the economy’s future. When more Canadians take on debt, it indicates that they are confident in their continued financial prosperity.