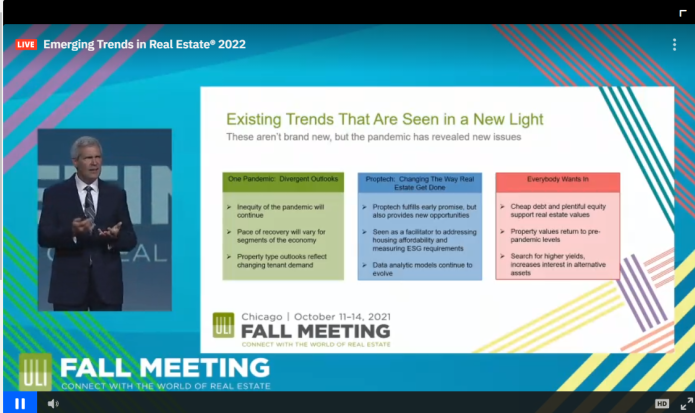 The Top Cities for Real Estate in 2022: Report

Notably, only one gateway city, Boston, made it into the top 10.

During a session at the 2021 ULI Fall Meeting in Chicago, where the report was first unveiled, Andrew Warren, PwC’s director of real estate research, said there weren’t many surprises in the top 10 markets, adding that “people have been talking about Nashville for years.”

The top 10 US markets to watch for general real estate outlook from ULI/PwC:

Researchers from ULI and PwC interviewed more than 900 people for the annual report and received responses from approximately 1,200 people.

The 111-page study described a number of trends and developments that have shaped the U.S. real estate market over the past year, including the rise of flexible working, a greater focus on climate-related real estate risk, the growth of proptech and the popularity of alternative sectors for investment.

The sentiment survey outlook for 2022 garnered a more positive response from respondents than 2019, the peak of the cycle. Though Warren attributed that to respondents who were concerned, a downturn was imminent as they are in the midst of the longest economic expansion in history.

Many of the trends discussed in the report are not new, but some have been seen in a different light due to the COVID-19 pandemic, such as the housing crisis, the adaptation of cityscapes and climate risks.

Panelists spoke at the general meeting on Wednesday about the large amount of capital currently flowing into real estate. “Everyone wants in,” Warren said. “The question now is: is there too much money? Can we post it?”

Alternative real estate types are currently attracting a lot of interest, including life sciences, data centers, single-family homes and staff apartments. Marcus & Millichap President & CEO Hessam Nadji said during the session that he expected the office sector, which is struggling with high vacancy rates in several markets, to perform better than expected in 2022. “The office is the diamond in the rough,” said Nadji.

More than 80 percent of respondents said they consider ESG when making decisions about their business, from an operational or investment standpoint. With many cities, such as New York, now requiring property owners to reduce their carbon emissions, the case for reducing emissions and energy efficiency is stronger than ever.

“Cities demand that buildings be different,” Bradford Dockser, the CEO and co-founder of Green Generation, said during the panel. “Lower emissions, less carbon, lower energy and water use – it is clear that the real estate that people will demand in the future is not what exists today.”

Read the full report from ULI and PwC.

10 Real Estate Tips BEFORE You Sell Your Home

NovaLoca Working to Promote your Brand