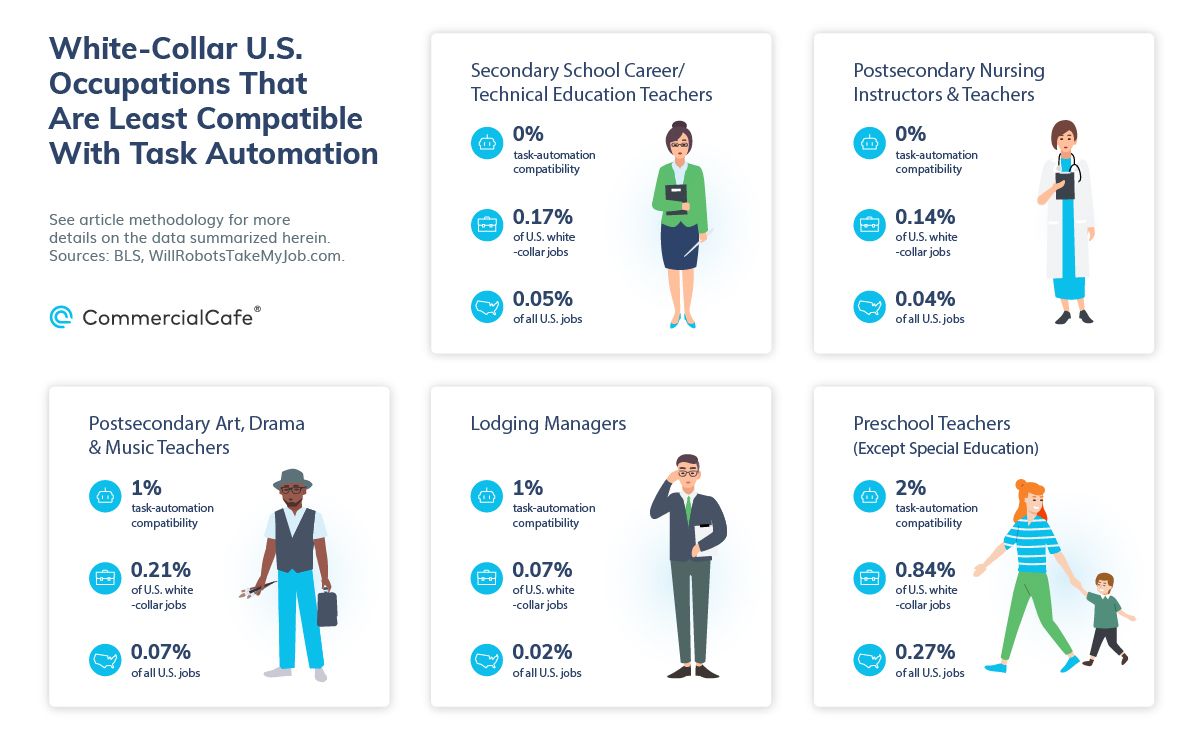 Automating menial and tedious tasks frees up resources for employees, which can then be better invested in more complex activities. In this way, automation can be a much-needed helping hand in any industry. According to BLS data, the white-collar occupations included in this analysis accounted for about 35% of the nearly 140 million jobs in the U.S. in 2020. Of that share, about 19.4 million jobs were estimated to be at least 50% compatible with automation. In other words, at least 50% of the tasks associated with each of these professions could be automated to some degree. According to the most recent employment data, this represents 40% of white-collar jobs and only 14% of all jobs in the US.

The lowest potential for job automation – when none (or almost none) of the aspects of work can be automated – is usually associated with occupations that are also essential to the functional fabric of society. In particular, high complexity jobs in arts, education, health care, counseling, social work and earth science and engineering are less than 5% compatible with task automation. Jobs in these occupations represent nearly 17% of white-collar workers and only 5.35% of all jobs in the US.

At 0% task automation potential, we found secondary/technical education teachers, along with post-secondary nurses and teachers. The former accounted for 73,530 jobs last year, which translates to 0.17% of white-collar jobs and 0.05% of all jobs in the US. Similarly, in 2020, there were approximately 61,100 nursing instructor and teacher jobs, accounting for 0.14% of all white-collar workers and 0.04% of all jobs in the country.

Post-secondary arts, drama and music teachers (1% compatibility with automation) accounted for 91,170 jobs in 2020, accounting for 0.21% of white-collar jobs and 0.07% of total employment. There were also 31,790 property managers in the US last year, making it the smallest cohort of the five occupations highlighted here. Also coming in at 1% compatibility with task automation, hotel managers accounted for 0.07% of US white-collar jobs last year, representing 0.02% of all employment in the country.

In contrast, preschool teachers (besides special education) made up the largest group of the five least compatible professions. In 2020, there were 370,940 jobs filled for this profession in the US, which accounted for 0.84% ​​of white-collar workers and 0.27% of all US jobs. According to the WillRobotsTakeMyJob score, about 2% of the tasks associated with this profession would be compatible with automation.

The other eight occupations estimated at 2% compatibility with task automation include clergy, conservation and soil and plant scientists, special education teachers and counselors. These occupations account for a combined total of 1.91% of white-collar jobs and 0.6% of all US employment.

Search the table below for comparable data across all occupations included in our study, and read on for selected highlights and occupation data for each state.

At the other end of the spectrum are the professions in which more than 95% of the associated tasks could be automated. These are often aspects such as administrative and administrative tasks, but also sampling, measurements and logistics management. The five occupations that topped this list together accounted for about 0.24% of total US employment: procurement workers; library technicians; tax preparers; freight and freight agents; and engineers in agricultural and food sciences each scored a near-perfect 10 for automation compatibility. About 97% of the tasks associated with each of these five professions could be automated. 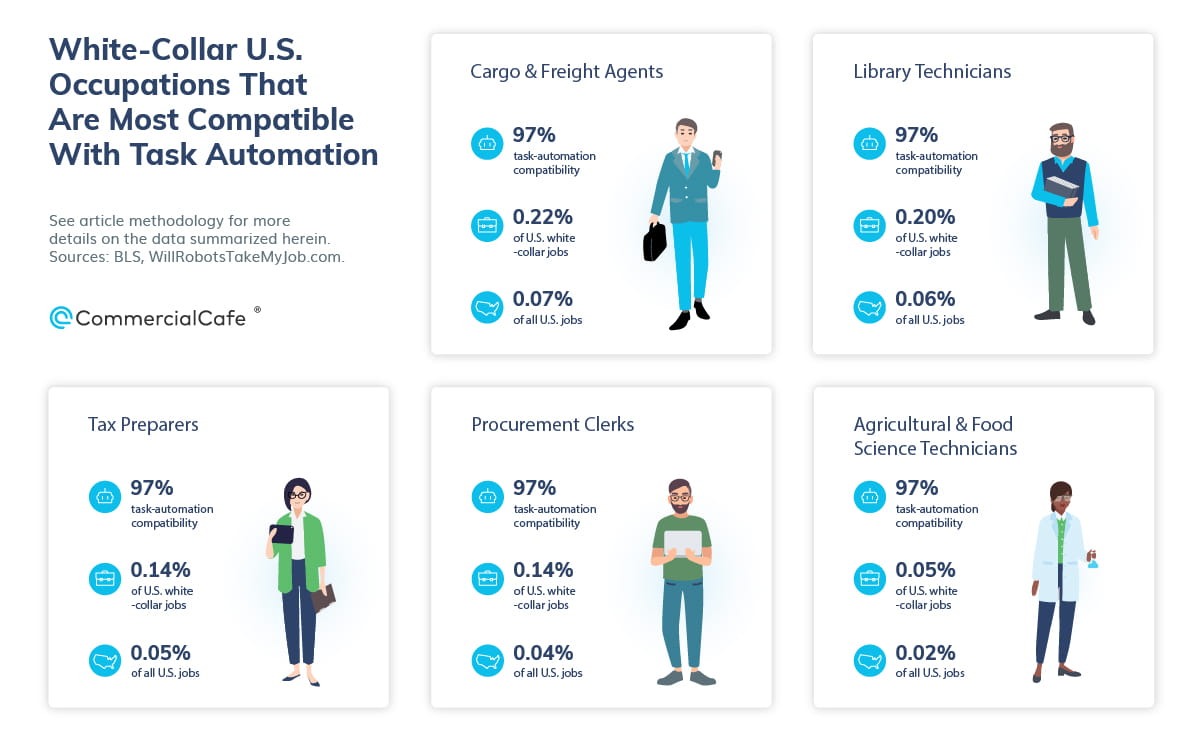 The number of jobs for a profession can vary widely from one state to another. In addition, these totals often depend on factors such as the total population, the predominant industries, and the overall health and complexity of the business environment.

On average, white collar jobs account for about 34% of the total number of jobs in each state. Last year, the three highest concentrations were in Washington DC, where 49% of all jobs were white collar workers; Massachusetts at 42%; and Connecticut and New York, who shared third place at 39% each. Meanwhile, Nevada was home to the smallest share of white-collar jobs — just 27% of the total number of jobs in the state. It was followed by Louisiana, Mississippi and Wyoming, with 28% each, and Indiana with 29%.

However, when we zoom in on white-collar occupations with above-average automation potential, the more detailed picture shows several bookends. In this scenario, the smallest proportion of white-collar jobs that are at least 50% compatible with task automation was 12%. Albeit with variation in the actual number of jobs, this was the case in Arkansas; Louisiana; Mississippi; Indiana; Washington, D.C.; and Wyoming.

Meanwhile, the highest percentage of above-average potential jobs for automation of all administrative departments we analyzed was in Puerto Rico. Here, white-collar jobs accounted for 35% of total employment in 2020, with 17% in occupations at least 50% compatible with task automation. Not far behind, Arizona and South Dakota followed with 16% each.

Expand each item in the list below for highlights and complete datasets on employment automation compatibility in each state and territory. Our analysis included data for all states in the continental US, as well as Washington DC, Hawaii and Puerto Rico.

Renters returning to NYC are frantic to find apartments